The early stages of the Internet of Things (IOT) have begun to change our lifestyles, business models and decision-making methods. As controllers, processors, sensors, and transmitters reduce in cost, any device that incorporates electronic circuitry and must communicate remotely with other systems is expected to be a "smart device." This includes sensors, meters, thermostats, switches, medical monitors, motors, household appliances, vehicles, tools, and even clothing and kitchen utensils. You can say anything by anything, and it can quickly become part of this fast-growing IoT.

Because IoT requires more connectivity in everyday products, the primary use of the MSP430TM microcontroller (MCU) is to implement IoT applications through an ultra-low power architecture. These include designs for minimum standby power, active processing power, peripheral power, and memory read and write. The MSP430 MCU provides the best power for developers who really care about low power (and ultra low power) in all IoT applications. The MSP430 MCU has an upgradeable platform to support the needs of today's consumer, industrial, health and fitness applications.

TI's ultra-low-power MSP430 MCUs are designed to work in wireless applications with multiple system architectures. This white paper introduces four different IoT architectures and highlights how to design an IoT design with the MSP430 MCU to easily design a wireless connectivity solution.

The ultra-low-power MSP430 MCU is designed to operate in four different connectivity architectures. As shown in the following figure, the first architecture is a wireless MCU solution that runs the network stack and host applications on a single chip. TI's CC430 series is a wireless MCU that is well suited for this architecture. This solution provides tight integration between the MCU core, peripherals, software and sub-1 GHz RF transceivers, creating an easy-to-use wireless MCU solution. TI's CC2541 is another example of a power-optimized wireless MCU. It enables low-bill bill of materials (BOM) costs to implement BluetoothÂ® Low Power (BLE) and proprietary 2.4GHz network nodes. The CC2541 is a combination of the performance of leading RF receivers and the 8051 MCU.

This configuration is well suited for small to medium RF protocol stacks where memory space can be evenly distributed to the RF physical layer, RF protocols, and top-level applications. Tight integration enables highly optimized code and performance for processing between the physical and protocol layers.

On the hardware side, this configuration is ideal for applications where physical layer size is a priority. This configuration eliminates the need for several external components, all of which are integrated inside the device. In addition, the number of components required for MCUs and RFs within a two-chip solution can be further reduced because these components can be shared in a wireless MCU configuration. Fewer component counts help simplify printed circuit board (PCB) routing traces and place and route considerations, providing greater freedom for RF placement and routing and component or sensor placement, taking into account printed circuit boards The size limit, these are the actual problems that affect the application. Finally, all of these benefits help minimize bill of materials (BOM) and physical board space to meet the needs of space-constrained and cost-optimized wireless applications.

An example of such an architecture is the eZ430-ChronosTM smart watch. This is a highly integrated wireless development system that provides a complete reference design for developers creating wireless smartwatch applications. Chronos is the benchmark platform for many applications, such as wireless watch systems, display for personal area networks, wireless sensor nodes for remote data collection, and many other applications. The CC430 is highly integrated, featuring a Sub-1 GHz RF front end, a 96-segment LCD display, a temperature sensor, a battery voltage monitor, an integrated pressure sensor and a 3-axis accelerometer for motion sensing control, all of which The devices are integrated into a small PCB suitable for the small form factor of the watch. The Sub-1 GHz radio allows Chronos to act as a central hub for nearby wireless sensors such as pedometers and heart rate monitors. On the software side, this application features SimpliciTITM, a simple and flexible RF protocol for low-power wireless applications with a star topology that can be upgraded to 255 nodes. 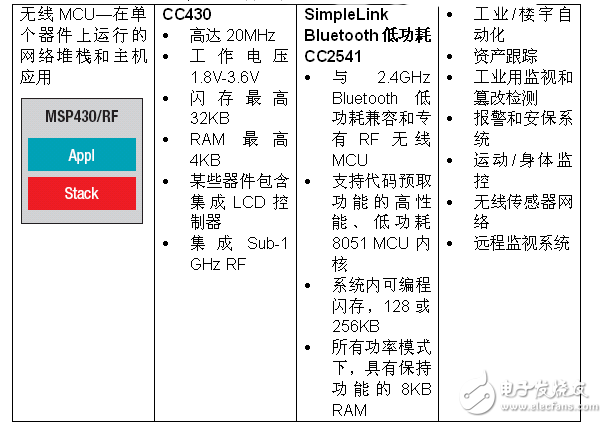 The second connectivity architecture is a powerful MCU such as the MSP430F5xx family that runs host applications and network stacks to enable wireless connectivity devices such as TI's SimpleLink Bluetooth CC2564 dual-mode solution to deliver the best RF performance in its class. .

In this configuration, the MCU has full control over the RF protocol and application layer, enabling applications to have more direct access and visibility to the RF and physical layers. This is the most traditional configuration for MCUs and RF transceivers. Empowering MCUs enables simple, robust RF functions that are what MCUs are best at: sending and receiving wireless data. Since MCUs typically have the most resources in terms of memory, processing power, and digital and analog integration, this configuration maximizes the versatility of MCUs, enabling them to leverage and optimize all resources to accommodate and integrate into different types of wireless. Agreement and application.

For example, this architecture is commonly found in ultra-low-power wireless sensor networks, such as the common MSP430 MCU paired with the Simplelink CC2500 2.4GHz RF transceiver. MSP430 MCUs are typically used in small to medium-sized networks. They can run relatively small and optimized wireless protocols with less memory footprint. They support star topologies and sometimes mesh topologies. Appliances in such architectures often have features optimized for power, such as sleep terminal nodes, time synchronization for access point beacons, packet storage and forwarding, and the like. These features are critical for ultra-low power, energy harvesting, and battery-free applications.

This architecture is also found in Near Field Communication (NFC) applications. The TRF7970A NFC transceiver can be paired with MSP430F5xx/6xx devices because they all have multiple SPI ports, built-in USB and I2C interfaces. At the simplest level of pairing, this combination adds automation, control, and authentication to many existing MCU applications. For example, with the help of an MCU, an NFC tag can replace a door lock key. The MCU contains the entire NFC stack, security authentication software, and application layers that control peripherals, including servers, motors, and LEDs. Further, this combination provides power saving functionality and convenience in connection switching applications, such as an IoT gateway, where users can take advantage of the simple, one-button setup/configuration capabilities of devices within a Wi-Fi network. 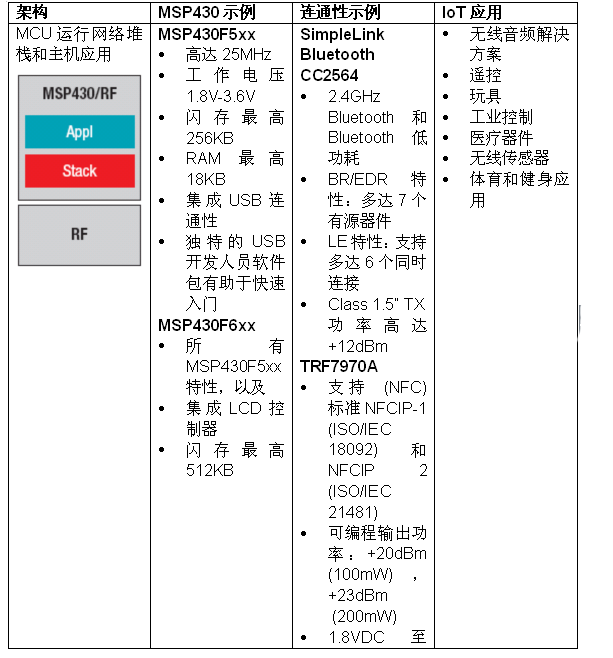 In the third architecture, the wireless connectivity solution includes a network stack similar to that found in the SimpleLink Wi-FiÂ® CC3000 module, and a separate processor for running host applications like the MSP430G2xx Value Line MCU. From a software perspective, this configuration can achieve minimal RF overhead on the MCU.

It is ideal for RF protocols that are fully functional and do not change often. This usually refers to well-defined and fully mature RF technologies, including Wi-Fi or GPS (and some Bluetooth). This situation helps to minimize field updates or reprogramming of the RF stack unless absolutely necessary. It also helps simplify code development because developers can rely on the packaged RF stack for development and focus on advanced applications in the MCU. The isolation of the RF stack from the application layer allows the MCU to use as much hardware resources and bandwidth as possible for the application.
This article is selected from the "Embedded Technology Special Issue", more quality content, download now